The IEA 2018 World Energy Outlook (executive summary here) suggests that peak oil – the time when oil returns begin an inexorable decline – is here and that a significant supply crunch could occur within the next 4 years. Alice Freidemann – the Energyskeptic – has reviewed the latest report which shows “a civilization crashing 8% decline rate that the IEA hopes will be brought to an also civilization crashing 4% rate with new oil drilling projects.”

This is very scary news. Our current growth oriented industrial economies cannot function with a dwindling supply of oil.  But that is precisely what is needed to mitigate the worst effects of the climate crisis. It is perhaps naive to expect that we will voluntarily end the industrial era by limiting our use of fossil fuels.  But it may be that nature will do that for us.

On page 159 of the IEA 2018 World Energy Outlook the following graph can be found: 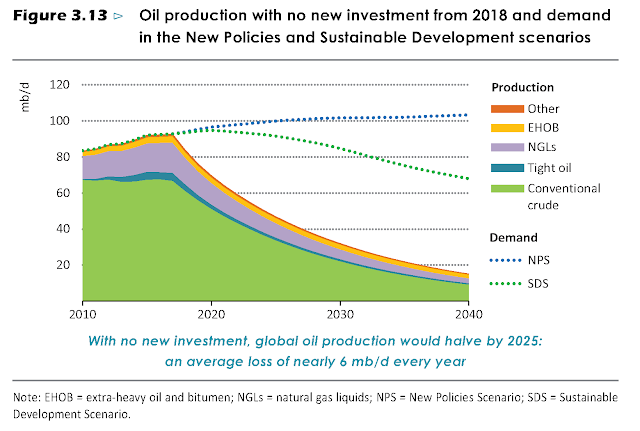 What this shows is a gigantic gap between what we want – demand – and what will be available within 20 years.  In order to fill that gap, new discoveries would need to come on-line within that time frame. Those discoveries would have had to happen by now in order to enable the infrastructure to be in place to exploit them within the next 20 years.  Yet there have been no significant discoveries that would fill this gap, nor are any forecast.  (see chart below)

The gap between supply and demand will likely cause massive economic disruption, perhaps even sending the interlinked global economy into a ravaging depression.   Such a thing will be extraordinarily destructive, for we have no plans in place to deal with the end of the fossil fuel era – either voluntarily or forced.

While I do not welcome the pain and disruption we are facing, the silver lining may be that this forced end to the industrial era could also end the annual increase of carbon dioxide in the atmosphere.  This would be very welcome – nature’s way of keeping us from letting CO2 in the atmosphere get too far out of hand.   This would leave us at a manageable point to begin drawdown.  Ultimately, it would ensure that we would have a chance of building the next economy – an economy not predicated on ecocide and injustice – within a livable climate.  A livable climate in which to do this is not assured AT ALL under the current trends. 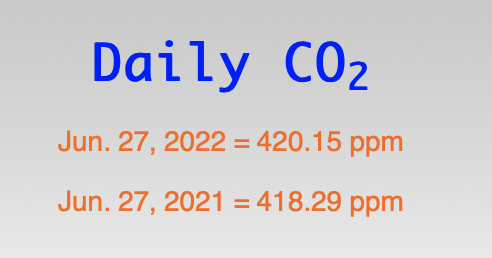