As long as it is not us, right? This is the carnage left after floodwaters from Hurricane Florence receded from I-40 in North Carolina. Interstate highways were not designed to be flooded by any known storm when they were implemented in the mid-20th century. Photo by Jeff Garrett.

A number of city councils in Australia are acknowledging that we have entered into dire climate conditions. They are preparing “Climate Emergency Plans” in order to direct their actions and to mobilize the communities.

An excerpt:  Council has recognised that we are in a state of climate emergency that requires urgent action by all levels of government, including local councils. We will undertake ambitious action and advocacy to reach our core goals, which are: 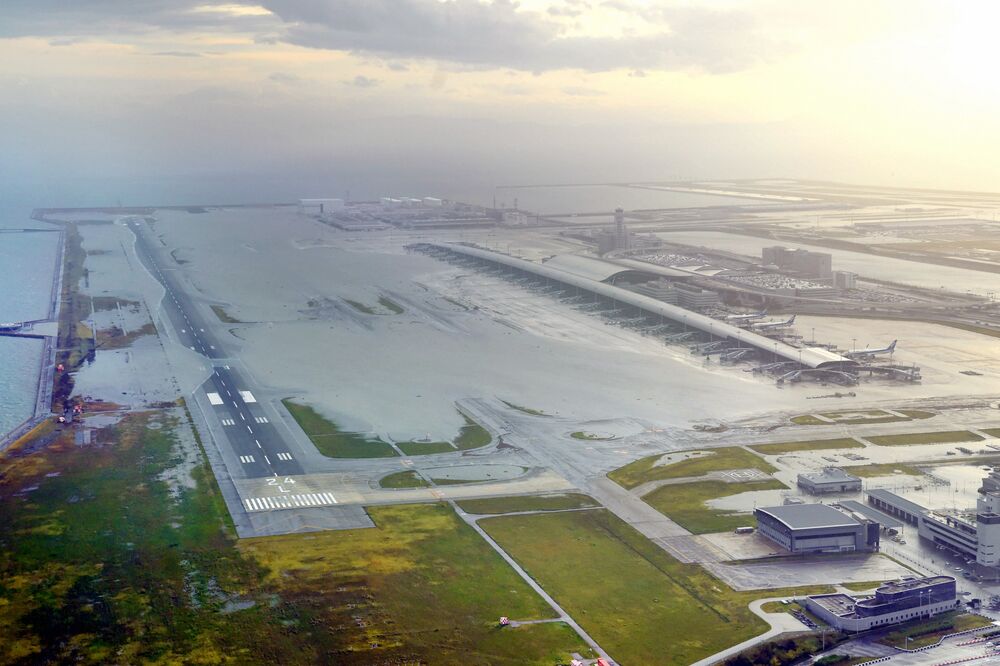 This is Kansai International Airport  after Typhoon Jebi slammed into southern Japan in early September 2018.   This wasn’t supposed to happen.  Yet it is, and now all the grand dreams of a techno future are under water.

How bad is the situation with plastic pollution? Rather bad, by all means. Citing from a recent paper by Geyer et al., more than 8 billion tons of plastic have been produced since the 1950s. Of this mass, 9% percent was recycled, 12% was incinerated, the rest is still around. It is this mass of plastics, billions of tons, which generates the pollution we see today. It is almost one ton of plastic waste for every human being living today. Imagine if it were magically to appear in your living room: one ton for every member of your family.

Still following Geyer et al., we learn that in 2015 the world produced 380 million tons of plastics from fossil hydrocarbons. To get some idea of how polluting this mass is, we can compare it to the total carbon emissions produced by hydrocarbon combustion, which today can be estimated to be around 9 billion tons per year. As an order of magnitude comparison, we can say that about 4% of the fossil hydrocarbons we extract become plastics.

4% doesn’t seem to be a large amount, but it is not negligible, either. Apart from the END_OF_DOCUMENT_TOKEN_TO_BE_REPLACED

The Seattle Times recently posted an article that talks about 5 new emerging trends in design in the Pacific Northwest. One of those trends was entitled “Greener is the New Green.”  How cute.  The piece describes some of the innovations in smart materials – induction cooktops! ductless mini splits! – AND smartphone controlled homes! Great, that will enable the rich to continue to live as they want to.  There is nothing in the article about those without permanent housing or the average folks in the distant suburbs.

The only remote discussion of energy is in a blurb about “Green Canopy Homes (which now is setting its own trend by building exclusively net-zero-energy and net-zero-energy-ready homes).”

Nothing about ZERO CARBON homes, or even better, BELOW ZERO CARBON homes.  Net zero would have been a good idea decades ago.  Now, it does nothing to account for the huge amounts of embodied carbon dioxide emissions in construction materials and processes.

The idiocy is summed up by this beaut of a quote: “Homebuyers began to expect that new construction should be more sustainable in a progressive city such as Seattle…”

Really, all this is marketing to virtue signalers that all can be well, but only if you invest in “greener.”  Seattle is no more immune to the coming turmoil than any other place. I did think that it was smarter.

Climate change is non-linear, meaning that we may have already unleashed the forces of our destruction.  Is it too late?

This is a brief excerpt from an article by Professor Jem Bendell BA (Hons) PhD:  “It is a truism that we do not know what the future will be. But we can see trends. We do not know if the power of human ingenuity will help sufficiently to change the environmental trajectory we are on. Unfortunately, the recent years of innovation, investment and patenting indicate how human ingenuity has increasingly been channelled into consumerism and financial engineering. We might pray for time. But the evidence before us suggests that we are set for disruptive and uncontrollable levels of climate change, bringing starvation, destruction, migration, disease and war.”

Read the rest and be challenged in your comfort.

This is a glimpse into the future – a city where people walk and bike. We can get there by vision, by choice.  Or we can get there through the pain of resource depletion.  But either way, this is where we are headed.

“How can it be that private property – the car – occupies the public space?”

“In Pontevedra, the usual soundtrack of a Spanish city has been replaced by the tweeting of birds and the chatter of humans.

People don’t shout in Pontevedra – or they shout less. With all but the most essential traffic banished, there are no revving engines or honking horns, no metallic snarl of motorbikes or the roar of people trying make themselves heard above the din – none of the usual soundtrack of a Spanish city.

What you hear in the street instead are the tweeting of birds in the camellias, the tinkle of coffee spoons and the sound of human voices. Teachers herd crocodiles of small children across town without the constant fear that one of them will stray into traffic.

“Listen,” says the mayor, opening the windows of his office. From the street below rises the sound of human voices. “Before I became mayor 14,000 cars passed along this street every day. More cars passed through the city in a day than there are people living here.” END_OF_DOCUMENT_TOKEN_TO_BE_REPLACED